Harry Dollin's career perfectly sums up the highs and lows that can be experienced when you play for AC Milanda. His debut came in a 13-2 defeat in a Third Division match ... but just over a year later he was playing in the final of the Glasgow and District Saturday Morning League's premier cup competition, having helped dispose of two of the First Division's best clubs along the way.

Milanda, not for the first time, were struggling for bodies on March 10, 1984, when they travlled across Glasgow to play an away game against Anniesland College. Dollin was one of two trialists in the line-up that suffered a thrashing from a team that was later thrown out of the league for playing ringers. Milanda lost 13 goals to players who clearly were not amateurs and scored twice, one an own goal and the other by BBC sports pundit Chick Young.

Also in the team was political journalist Dave Whitton, later to become right-hand man to Scotland's First Minister Donald Dewar. The line-up that day was: McMillan, Devine, Dollin, Strickland, Veitch, McGhee (Sorensen), Leary, Philip, Stewart, Whitton, Young. The records show Dollin missed the next two matches, shell shock may have been the reason but he did return and embarked on a career that saw him play somewhere in the region of 400 games for the club. The following season, 1984-85, provided the first real highlight when Milanda, still a Third Division club, won four away games, including trips to face First Division leaders All Stars and a Moonshiners team that included future Milanda stalwart Graeme Hyslop, to make it through to the final of the GDSML Cup.

In a marvellous final, played at Cambuslang Juniors ground on May 18, 1985, Milanda lost 6-4 in extra time after a 4-4 draw with Easthall, a team that was later to become Craigend Thistle and then merge with Red Star Baillieston to become the top club in the GDSML. The team that day included David Livingston, now Sky TV's golf presenter, and read: McMillan, Devine, Dollin, Livingstone, S Anderson, McGinty, Leary, Young (Williamson), McCormick (Duffy), Stewart, M Anderson.

The next highlight for Dollin was winning promotion to the Second Division in season 1985-86, Milanda being pipped for the league title by a team called Uranus. Dollin also helped Milanda win a four-club invitational tournament for the Paul McManus Memorial Shield in the 1990s at Shettleston Juniors' ground and was a winner again of this trophy when it became a one-off match with hosts Budhill. In season 1997-98, the club's longest-serving left-back found the net in a 12-1 win over Wanderers and his strike was immediately voted Goal of the Century by team-mates.

Dollin was better known for stopping the ball going into the net and must have been responsible for dozens of goal-line clearances during his time at the club. Manager Alan McMillan, who was team goalkeeper during most of Dollin's career, said: "Harry was a fantastic servant to the club and got me out of a hole more times than I care to remember. He always seemed to be there to boot the ball off the line if it got past me. "He never let the team down, never caused a problem and was just a joy to work with."

The final accolade for Dollin came shortly before he called it a day when he was voted Milanda Player of the Year. He hung up his boots at the age of 41 in August 2002. Ironically, this was on the eve of a game that produced another 13-2 scoreline, although this time Milanda were the winners and Woodside the losers. During his time with Milanda, he counted brother Stephen and brother-in-law Brian Dunn among his team-mates.

Harry was asked to look back on his Milanda career and pick out some of his favourite memories.

Favourite penalty taker - me scored 12 in a row

Favourite story - Gerry McGinty at Greenfield ran on to the next pitch to retreive the ball and was blown offside as they had the same strips on. 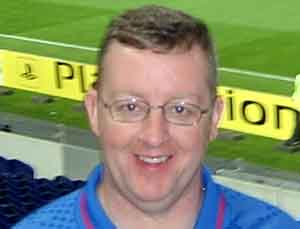 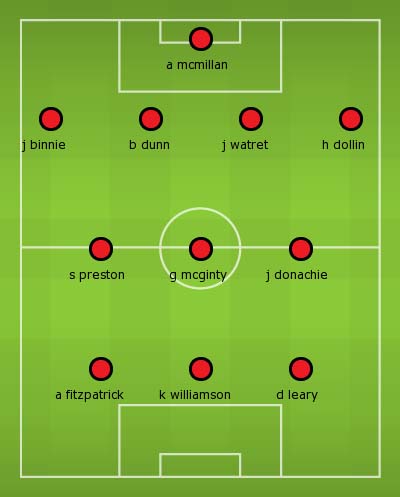