Milanda's trophy cabinet fell into disrepair during the 80s and 90s but an incredible run of 6 finals and 4 Cup wins between 2002 and 2011 had Alan requiring round the clock security to protect the trophy haul.

Milanda also won the Paul McManus Shield in 1999 and 2000. The shield was in memory of one of Budhill's young players who died in tragic circumstances. We actually managed to win it and lose it in the same season. It was won in August 2000 then lost again in June 2001. 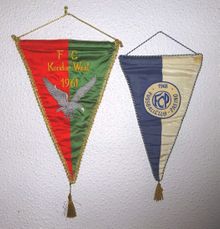 2 Pennants Milanda received during their tour of Munich in 1979.