It started with a phone call to Milanda boss Alan McMillan and ended up with half the Milanda squad running round Glasgow topless and making page 3 of the Daily Record. Yes this is the story and gory details of how Milanda became stars of the small screen and featured in one of the biggest adverts ever made.

One Saturday morning in early January Alan mentions that a casting agency called him up asking if some of our players would like to take part in an advert that Carling are filming in Glasgow. Apparently they were looking for some real footballers to help with the other actors. Clearly they hadn’t watched Milanda play. Despite most of us thinking this was some kind of wind up a number of us sign up and are instructed to meet in the Marriot Hotel at 7.30 on the morning of January 17th.

Those that managed to get out of bed at that ungodly hour included Kevin Williamson, Brain Dunn, Donald Leary, Martin Coyle, Hyssie, Andy Scott, Ross Early, Mark Callender and the man who became the star of the show, Soapy. (apologies if I’ve forgotten anyone).

A hot breakfast was provided as the producer of the advert talked us through the day’s proceedings. As we’d been informed earlier in the week the advert was to show a massive game of football between two sides, the shirts against the skins. Guess who Milanda got to play? So we were all issued with heat blankets and went off to Pitt Street beside Habitat to shoot the first scene of the day.

How many Milanda players can you pick out from this shot? I can only see seven.

Now while the producer was explaining to us what was going to happen he said the chances of you getting a touch of the ball, given there was around a 1,000 people there were slim. He’d obviously never tried to get the ball from Soapy on a football park. In seven takes Soapy finished with the ball 5 times and was in the centre of nearly every shot. Although it was freezing everyone had a laugh none more so when Brian returned with a carry out from his car that was all Budweiser. This got the Carling people a little hot and bothered. So after a couple of hours of falling down hills, falling under cars and trying to get the ball off Soapy it was a take and we retired back to the hotel for some hot coffee.

Next up was the goal-scoring scene and was to be filmed just along the road from the hotel. This involved three different groups converging before a pre-rehearsed move saw the winning goal being scored. It was during the filming of this part that we lost Andy Scott after a late tackle sent him sprawling and badly cut his hand. Was a red card but the ref never saw it. Again Soapy was at the centre of things and even scored on one of the takes when he wasn’t meant to. In the final cut of the advert both Soapy and Brian take centre stage as you can see from the picture below.

There was one more scene to shoot and that was everyone running over the hill on Scott St down to Sauchiehall Street. There were a few causalities from the run down this steep slope and more than the odd look from passers by as all these topless guys were running down the street.

The day ended with a few beers to watch the football in a local boozer. Despite it being bloody freezing and having to expose our manly and muscled torsos to the elements it was a brilliant laugh and about as close as most of us will get to TV stardom.

How the Daily Record reported it and where the two pics above came from.

Did you manage to pick out the Milanda players?

From left to right - Ross, Andy (I think?), Soapy with the ball (as usual), Brian, Coyle playing to the camera, Donald with Kevin behind him. Can't see Hyssie or Mark but they are there somewhere.

Andy before that disgraceful late tackle ended his acting career early. Ross behind him with his fetching silver shirt and Soapy in front with his hideous red jumper. Donald just sneaks into shot on the right. Kevin might be the person behind Andy's left hand. 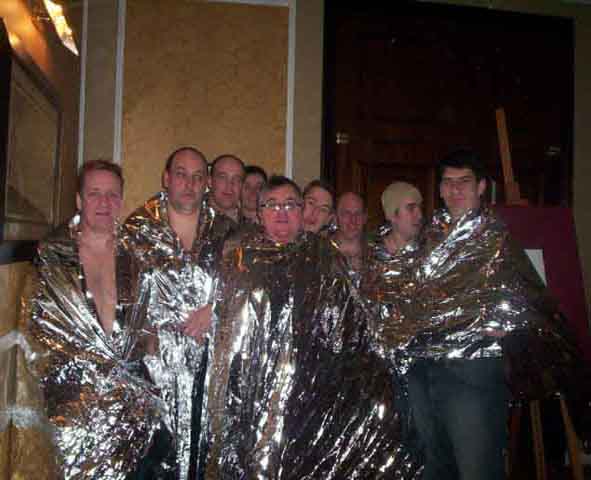 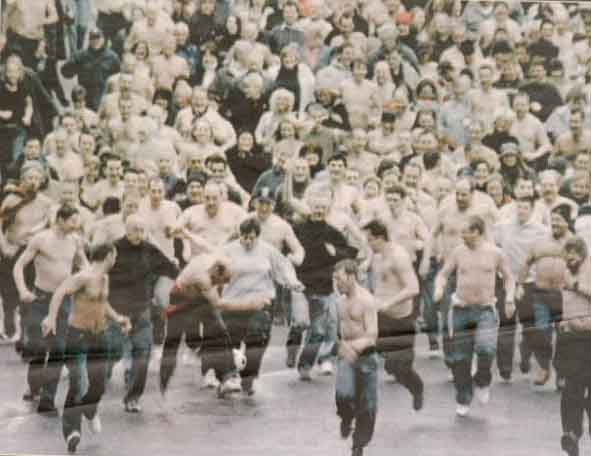 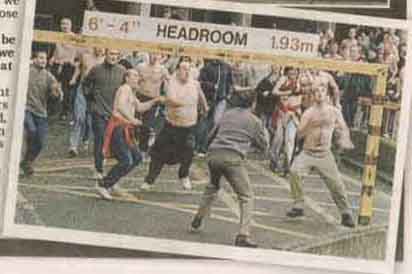 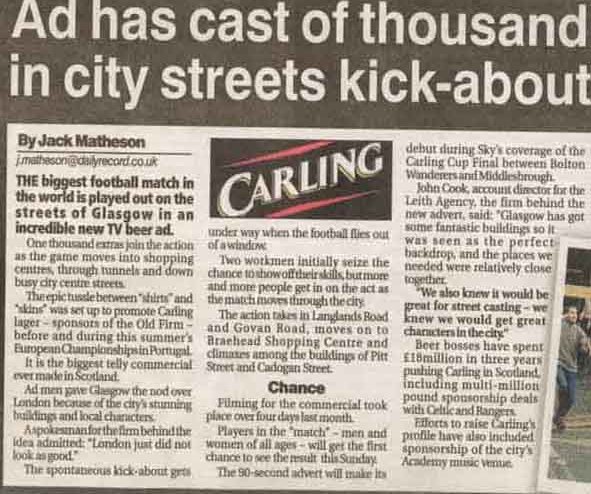 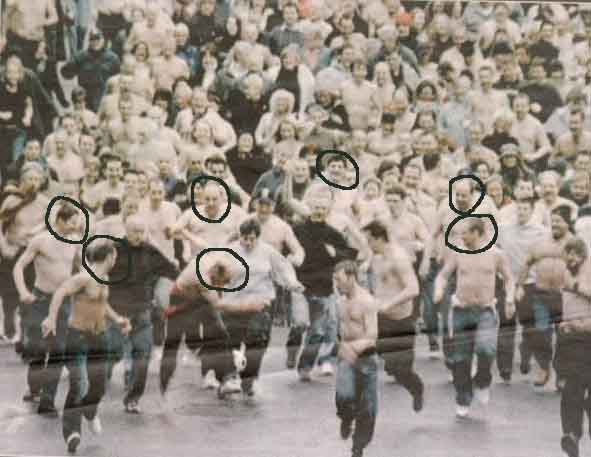 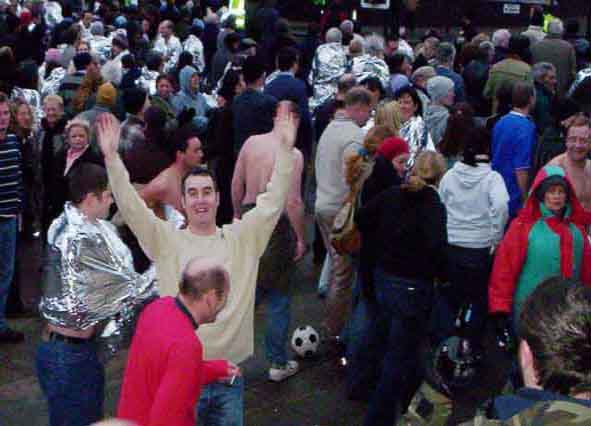 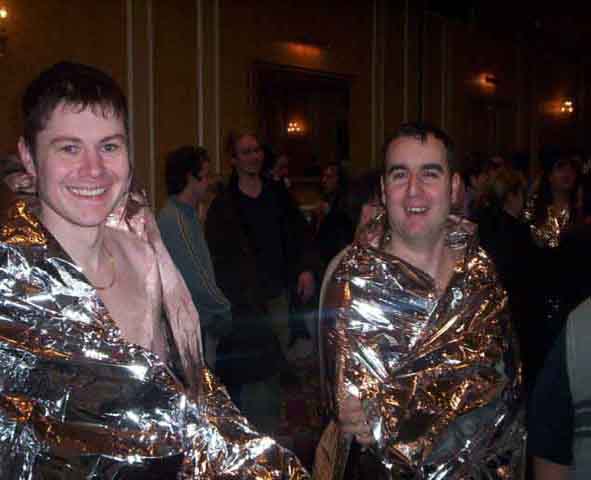 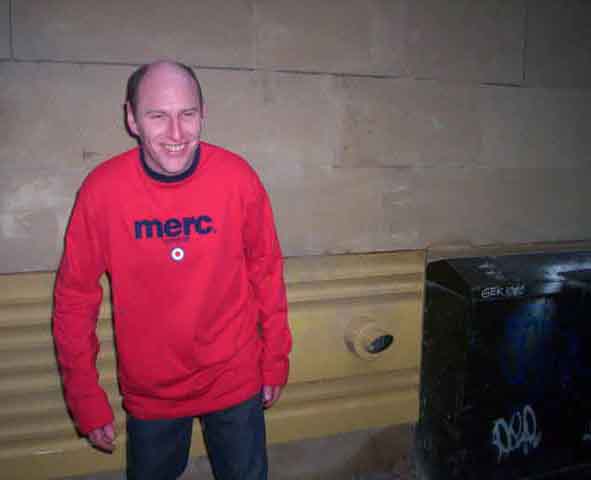