Milanda in München in Germany 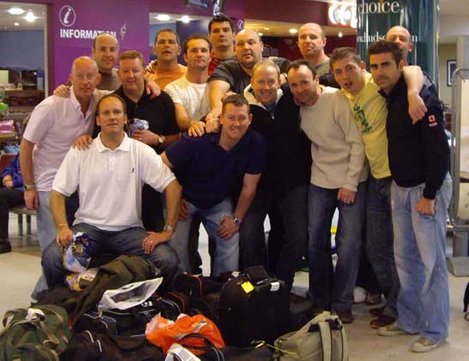 15 guys heading off to a beer festival in a foreign country. What can possibly go wrong? Well, very little in fact. 4 days of drinking, pisstaking, drinking, laughs, drinking, flashing, farting, drinking, snoring, and did i mention drinking. I’ll attempt to paint a picture of the 4 days but many things happened off the ball and the drinking may have killed off a few of my memory cells.

Binnie and Craw managed to secure a mini bus and driver to take us to the airport. A few lucky ones get to go by car. Surprisingly everyone’s ready to go on time and after a drive through darkest Lothian we arrive at the airport in plenty of time for a few beers before the flight takes off as scheduled at 12.50 Given that it’s easyjet we are scattered all over the plane but Wullie decides to try and sell a football card and when he’s finished he talks the stewardess into allowing him to announce the result over the tannoy system. Wullie continues his air steward training by helping to collect the rubbish from the other passengers and letting the easyjet stewards put their feet up. This sets the tone for the weekend.

After landing in the glorious sunshine of Munich we head off to the hotel in a fleet of taxis and get stuck in some Munich rush hour traffic jams. On our way we pass the mega-impressive Allianz Arena which is hosting the 1860 Munich game later that night which we decide later not to attend. Once at the hotel we hit our first snag as we try to get the rooms organised. Elena, our receptionist, draws first blood as Brian announces he’s a ‘country member’ only for her to reply ‘I remember’. Then the German/Scottish translation barrier comes into play as Brian accuses the hotel of ‘ripping it’. Finally 3 beers later we get our rooms and get settled in before dinner.

Dinner is an entertaining experience as the mainly fish menu has the team a bit restless but eventually they offer to cook us up some steaks and as they arrive Tommy M who has had a few drinks with Mr Daniels by this point decides to eat a steak he never ordered and on the Saturday he has no re-collection of this. After dinner it’s taxis into Munich City centre and an attempt to get into the famous Hofbräuhaus. The most famous beer house in Munich the day before Oktoberfest and it was busier than Ibrox underground 15 mins before the final whistle. Another couple of places were also too busy before we ended up in some dodgy looking downstairs bar called Americano. 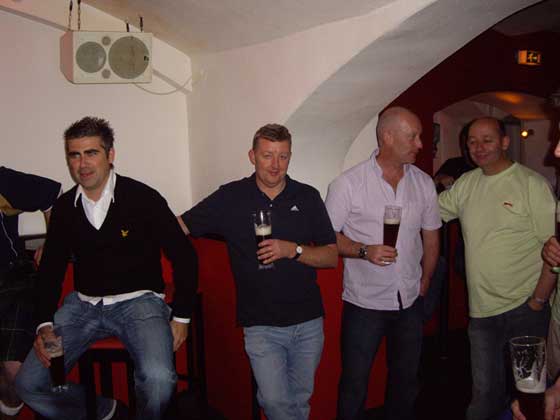 One drink and we were out of there quicker than Tommy could say ‘my round’. We then decided to go really native and ended up at the Hard Rock Cafe. At least some of the music was acceptable but some of the views weren't. 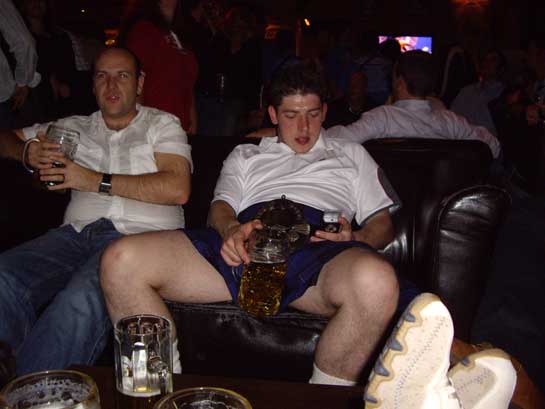 The day’s excitement proves too much for Tommy and has to be escorted home after falling asleep.

The rest of us head off to a nightclub called U30 hoping it doesn’t stand for Under 30. Craw thinks Murray has got his boxers on and Murray has to prove he doesn't.

Much drinking and dancing with one trouser leg rolled up to some of the worst 80s music ever finally ends and we arrive back at the hotel at sometime between 3 and 5. I think.

It’s a slightly subdued crowd that stumble down to breakfast and Stefan the hotel's guest liaison is taking the piss when he arrives with beers for us all. Note to Brian – careful what you ask for. The beer forces the majority to head back to get another couple of hour’s kip to prepare themselves for the day ahead and our first visit to Oktoberfest which officially opens at noon. We arrive there early afternoon and the place is mobbed. The kilts worn by some go down well. Except Craw's kilt which refuses to go down and looks like all of its £88. He said he's wearing it to the game this week. 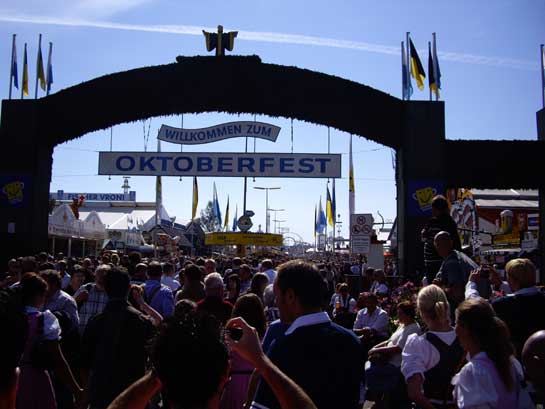 A mix of huge beer tents and a massive fun fair. We try to get into one of the beer tents but it’s already full. After another few attempts at different tents we meet the same problem. Beer beer everywhere and we can’t get any to drink. There are a few anxious faces by now and we head to the far end of the site and eventually find a place we can get served at the strangely named Nymphenberg Hall which sells a rather fine Paulaner Weissbier. This becomes our home for the rest of the day and we eventually take over a table and some benches. 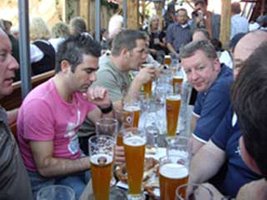 The festival has a very friendly vibe about it and no matter who you sit or stand beside conversations start up with people from all over the world including obviously locals from Munich and further afield in Germany like Stuttgart, the USA, Sweden, England, Ireland, New Zealand, Holland, Australia and Lanark. The girl from Lanark looked kind of familiar.

She had an Australian friend who claimed she was 6ft 4 but looked about 6ft 7, we did try to sign her as our new centre half. 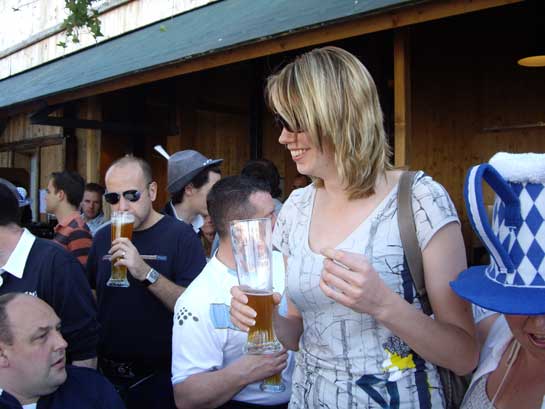 Anyway one of our party, who will remain nameless, used all his tact and diplomacy when announcing to the girl that ‘Technically she was a freak but he’d still give her one’. Not the world’s most sensitive chat up line. Needless to say it wasn’t successful. It did lead to a comment by Scott Grant later on when he described the girl as clearly very conscious of her height and that this comment would have upset her so much she would have to go and see a shrink. ......... Ach please yourself I thought it was funny. Later on the same girl was being chatted up and the chant went up ‘She’s too tall for you, she’s too tall for you, she’s too tall for you’ followed by, ‘ Shall we get a stool for you’ and ‘Do you want a yellow pages’. I tell you, drink didn’t half make us funny. As the day took its toll a few wandered off back to the hotel and others sought more drink. The webmaster thought it would be a great idea to walk home to our hotel. It was only an hour away.

A slow start to the day as everyone does their own thing but they get together to go to an Irish bar called the Shamrock. 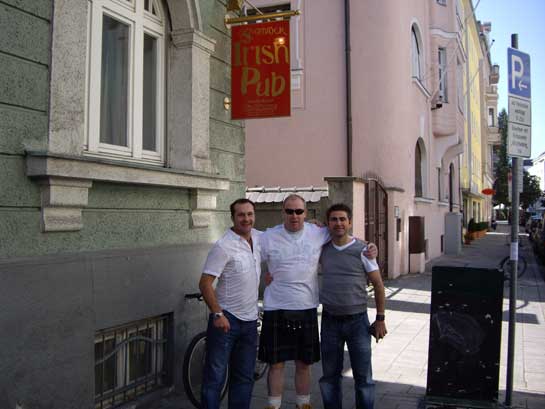 Nothing really happened there apart from getting some great steak pies and Wullie finding my hair from the 80s. 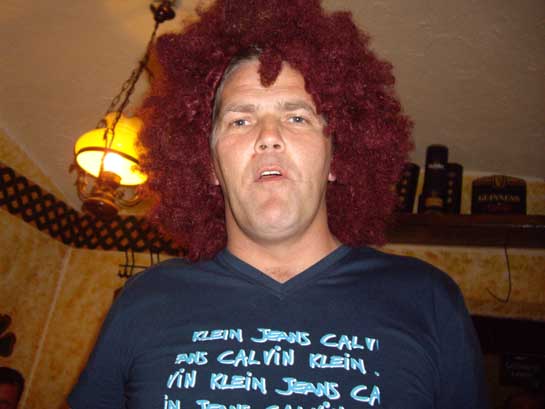 After a quiet and peaceful afternoon it was back to the Beerfest and time for some more food. 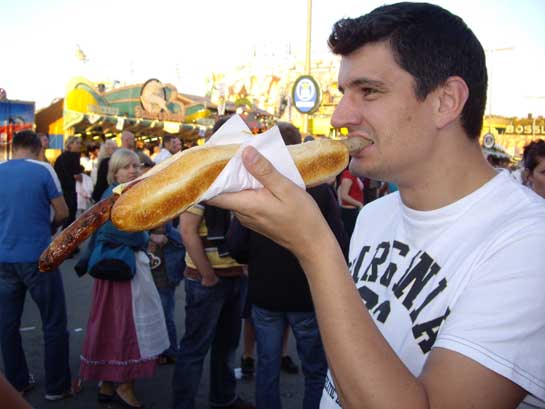 This time we managed to get into one of the halls and got ourselves a box for an hour. Everryone is up on their seats or on the benches singing along to classics like Country Roads, Angels and Ruby. 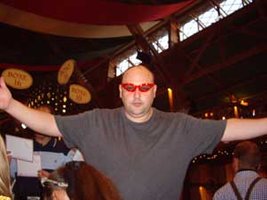 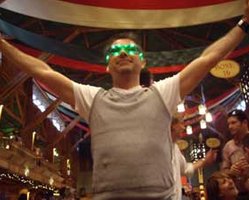 When we get kicked out we get a table upstairs and I get to see how I'd look with a combover. 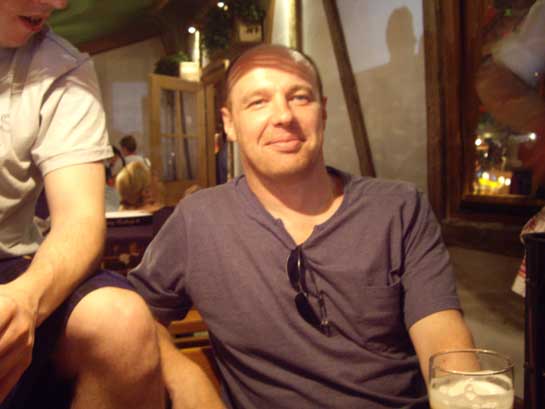 Later we get into another beerhall and we find ourselves a bench and join in the fun, as you do. 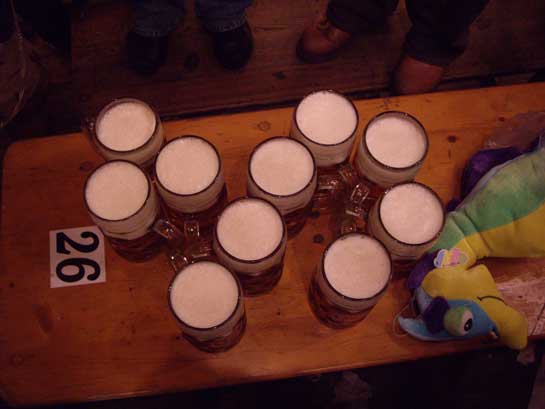 Coyle shows he's ready for the next Milanda game. 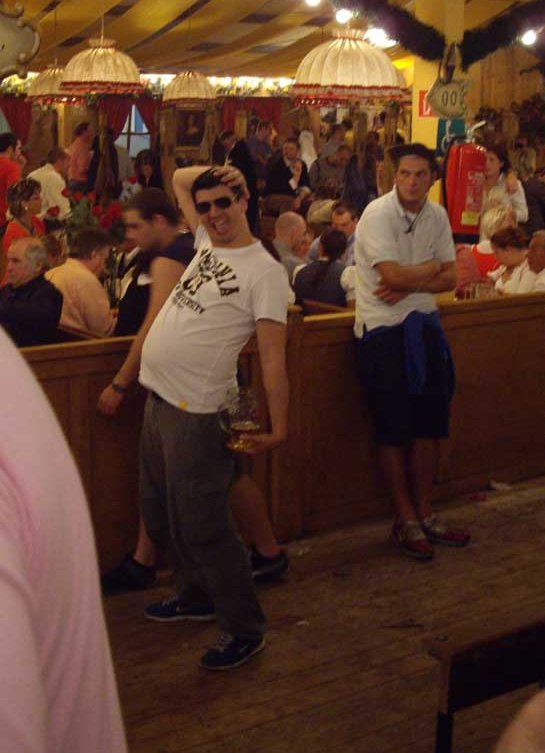 I also promised these Aussie girls I'd put their picture on the site.

The night ends with a few drinks in the hotel bar and Dave O'Neill and Scott Grant give us a few bars on the piano before most retire to their kip.

It's all over and most of us are about done in. Some die hards are still drinking but the rest of us just want to sleep and recover. Our journey home is fairly uneventful and we are once again picked up by the minibus to take us back home.

I think everyone will agree it was a cracking trip and a great laugh. Big thanks to Brian for pushing the trip through and making sure it became a reality and also for looking after the kitty while we were there. To Jim and Craw for organising the transport to and from Edinburgh airport. and to everyone else for making it such a great laugh. 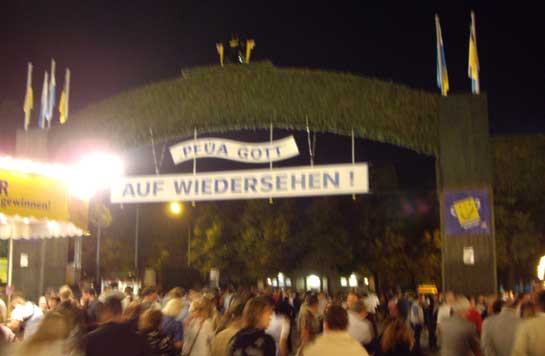 The end and until next year. Cheers.

Below are pictures I took in Munich and also a video of Paul Murray and his dancing feet. The second one contains pictures from Coyle.